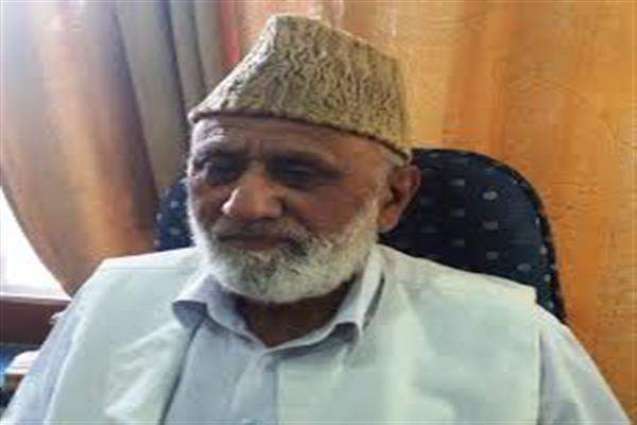 Srinagar, February 21 (KMS): In occupied Kashmir, Tehreek-e-Hurriyat Jammu and Kashmir Chairman, Muhammad Ashraf Sehrai has said that the attacks on Kashmiri students and traders in different states of India are a collective shame for New Delhi.

Mohammad Ashraf Sehrai was reacting to reports about arrests and expulsion of Kashmiri students from educational institutions in India. The APHC leader in a statement issued in Srinagar, today, expressed gratitude to the international humanitarian organisation Khalsa Aid, local gurdwaras and members of Sikh and Muslim communities for providing protection, food and shelter to the stranded Kashmiris

The Chairman of Hurriyat forum, Mirwaiz Umar Farooq in a statement pointed out that the families of Kashmiri prisoners lodged in jails outside Kashmir were worried about their safety particularly after the killing of a Pakistani prisoner in an Indian jail.

Jammu and Kashmir Liberation Front Chief, Muhammad Yasin Malik addressing a press conference in Srinagar refuted the Indian authorities’ claim, saying that he never enjoyed any government security. He said this in response to the statement by Governor Satyapal Malik administration that the security of eighteen Hurriyat leaders including Muhammad Yasin Malik had been withdrawn.

Meanwhile, complete shutdown was observed in Chenab valley of Jammu region, today, as a mark of protest against the harassment of the Kashmiri and local Muslims. Call for the strike was given by the Anjuman-e-Islamia Bhadarwah and supported by various religious and political organizations. Traders will shut their businesses at commercial hub, Lal Chowk, and adjacent areas in Srinagar, tomorrow, to register their protest against the attacks on the Kashmiris.

On the other hand, the spokesperson for the United Nations High Commissioner for Human Rights, Rupert Colville, in a statement issued in Geneva expressed concern over the brutal targeting of Kashmiris and Muslims by Hindu goons on the pretext of the Pulwama blast in occupied Kashmir. The spokesperson said that the UN Rights Chief was concerned over the reports from India that some elements were using the Pulwama blast as justification for threats and potential acts of violence targeting Kashmiri and Muslim communities living in different parts of India. He asked New Delhi to take steps to protect people from all forms of harm that may be directed at them on account of their ethnicity or identity.