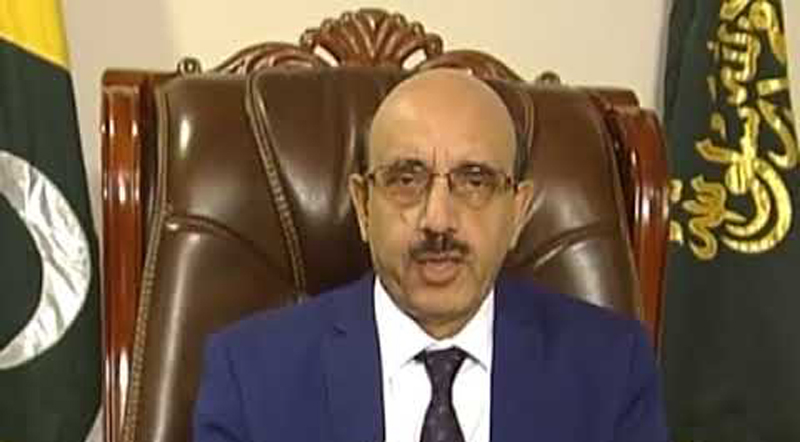 Muzaffarabad, April 10 (KMS): Azad Jammu and Kashmir (AJK) President Sardar Masood Khan has termed the new domicile law imposed by India’s fanatic government in Indian Occupied Kashmir (IOK) “a serious war crime”.
“The fascist domicile laws in the Indian Occupied Kashmir violate the Fourth Geneva Convention and the UN Security Council resolutions on Kashmir and constitute a serious war crime and a crime against humanity,” he said.
In a video message, the state president said that the fascist domicile laws have been imposed by the fanatics of Bharatia Janata party without the consent of the people of the occupied territory when the international community was busy in fighting infectious coronavirus pandemic to divert attention from the worst repression being let loose by the Indian occupation troops against the innocent Kashmiri people.
He asserted that the domicile policy which has been imposed under the cover of a double lock down – the military lockdown continuing in occupied Kashmir for the last eight months, and the lockdown enforced in the wake of the outbreak of coronavirus – was actually a vicious plan to implant non-native people from all over India to change the demography of the disputed region.
“The motive is to reduce Muslims to a minority, to grab their jobs and lands, and to turn the territory into an Indian colony,” he underlined.
Sardar Masood Khan said that the Kashmiri people spurn these illegal laws, and urge the United Nations, the UN Human Right Council and the International Committee of the Red Cross to call out India for this serious breach of international humanitarian law, and take steps to reverse and quash these unlawful laws.
He also demanded immediate release of thousands of political prisoners, including women, young boys and children, to save them from the spread of coronavirus in the cramped concentration camps and torture cells.
The AJK president expressed gratitude to the six international human rights organizations that have raised their voice for the release of these prisoners. “The OIC has also condemned the new domicile law and the UN Secretary General has asked India to closely monitor the plight of the political prisoners in the occupied territory,” he said and added that these are mild reactions to grave violations and the crimes being committed by India in occupied Kashmir.
Quoting India’s former Supreme Court Justice Markandey Katju, who had pointed out that Kashmir would become India’s Vietnam, the AJK president said India cannot walk into a vast centuries-old homeland of 14 million people, occupy it and trample all their rights. Kashmiris, he said are not less brave and resilient than the Viet Kong; nor any less intelligent. Time is on their side, but the UN Security Council, its permanent members, and other powerful nations are not playing their part in protecting the Kashmiris from the Indian carnage or saving the region from a possible lethal war.