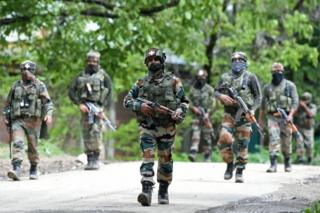 The troops martyred the youth during a cordon and search operation in Kamrazipora area of the district.

Earlier, one Indian soldier was killed and another injured in an attack in the same area.

The operation was going on till last reports came in.

Director General of Police, Dilbagh Singh, claimed that the slain youth was a militant who was identified as Azaad Lelhari.

Meanwhile, another Indian soldier received injuries in an attack on a team of 52 Rashtriya Rifles in Hygam area of Sopore.