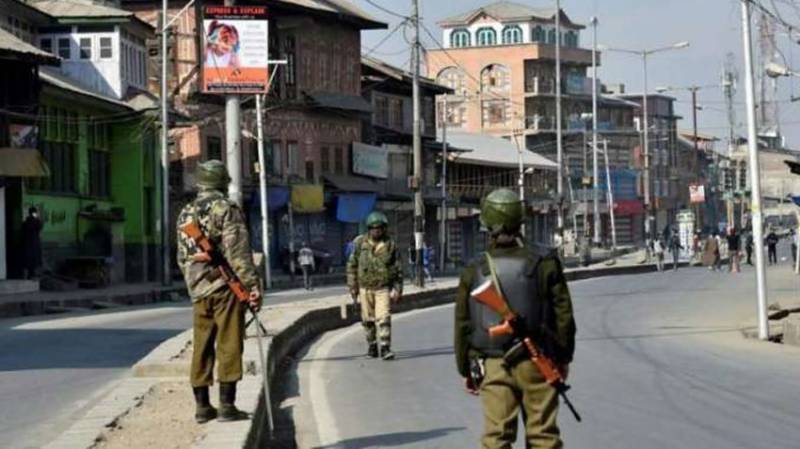 Srinagar, March 16 (KMS): In Indian illegally occupied Jammu and Kashmir, complete shutdown was observed in Shopian and adjoining Pulwama districts against the killing of two youth and destruction of houses by Indian troops.

Bodies of the two martyred youth were recovered from the debris after the troops blasted around a dozen houses with explosive material during a three-day long violent cordon and search operation at Rawalpora in Shopian district. All shops and business establishments were closed while public transport was off the roads. The troops were deployed in strength in different areas of Shopian district to prevent anti-India protest demonstrations. Meanwhile, posters pasted on walls, pillars and electricity poles by Jammu and Kashmir Resistance Movement, Kashmir Youth Forum, and Jammu and Kashmir Justice League called for complete shutdown in IIOJK, tomorrow, against the Indian state terrorism in the territory and to pay homage to the martyred youth.

Hurriyat leaders, Bilal Siddiqui, Muhammad Yousuf Naqash, Jammu and Kashmir National Front and Jammu and Kashmir Employees Movement in their statements in Srinagar denounced the killings and destruction of houses by the troops in Shopian. Human rights activist, Muhammad Ahsan Untoo, in a statement sought a probe into the complaints of the residents of Rawalpora that they were used as human shields by the troops during the operation.

Muttahidda Majlis-e-Ulema, headed by Mirwaiz Umar Farooq, at an emergency meeting in Badgam, today, discussed the situation caused by the recent act of a RSS pawn, Waseem Rizvi. The participants of the meeting, chaired by senior APHC leader and the President of Anjuma Sharie Shian, Agha Syed Hassan Al-Moosvi Al-Safvi, termed the petition filed by Rizvi in the Indian Supreme Court seeking omission of 26 verses of the Holy Quran as a deliberate attempt to hurt the religious sentiments of the billions of Muslims across the world and to stoke sectarian violence.

On the other hand, a protest demonstration of Muslims, Sikhs and Dalits led by Jammu and Kashmir Peoples Movement Chairman Mir Shahid Saleem was staged in Jammu against blasphemous remarks of Indian citizen Waseem Rizvi. The protesters demanded stern punishment to the blasphemer.

The Jammu and Kashmir Peoples League Chairman, Mukhtar Ahmed Waza, speaking in a public meeting in South Kashmir said dialogue is the only way to resolve the lingering Kashmir dispute.

Indian troops conducted fresh operations in Srinagar, Baramulla, Budgam and other parts of the valley. They harassed the inmates during house-to-house searches in Mujgund, Brath and Chadoora areas. The sleuths of India’s National Investigation Agency assisted by personnel of police and paramilitary forces conducted raids at the residence of detained Kashmiri trader, Showkat Ahmed Parray and a shopping complex at Wangipora Sumbal in Bandipora district.

A report released by Kashmir Media Service, today, said that religious minorities particularly Muslims and Christians are under constant threat in India. The report mentioned the introduction of a new and more stringent version of the law in Madhya Pradesh state and said that BJP governments in Indian states plan to impose anti-conversion laws to prevent Hindus from embracing Islam and Christianity. The report pointed out that Christians faced at least 25 incidents of attacks by Hindutva forces in Madhya Pradesh alone, last year.