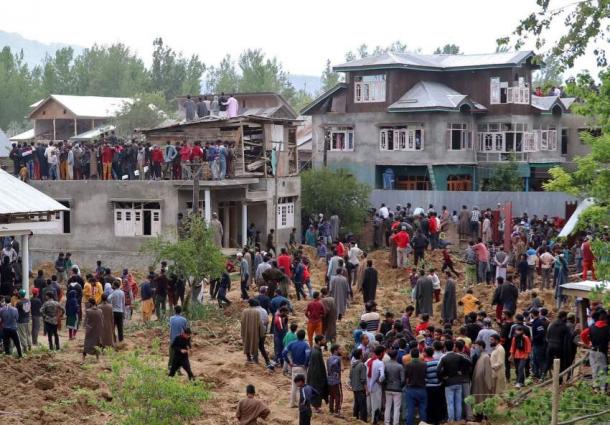 Srinagar, April 13 (KMS): In Indian illegally occupied Jammu and Kashmir, a delegation of Jammu and Kashmir Youth Social and Justice League (JKYSJL) visited the residence of martyred youth in Bijbehara to express sympathies with the bereaved families.

Ahmad Malik and Sameena Banoo on the occasion said that, blood of innocent people would not go in vain. “We have been deprived of freedom right while India has started genocide of the oppressed Kashmiris,” they said as per a statement issued by the party.

The leaders added that these brave hearts including highly educated youth were laying their lives to end the brutal slavery of their people.

The delegation also visited the site of the military operation and expressed solidarity with the house owner whose house was damaged by Indian forces.

Meanwhile, a delegation of Jammu and Kashmir Salvation Movement led by Merajuddin visited the residence of a martyr Rizwan in Eidgah area of Srinagar and expressed condolence over the death of his mother. Rizwan was martyred by Indian troops in early 1994. Merajuddin was accompanied by Tauqeer Ahmad, Imran and Imtiaz Ahmad.