Protest in Jammu against Modi’s policies 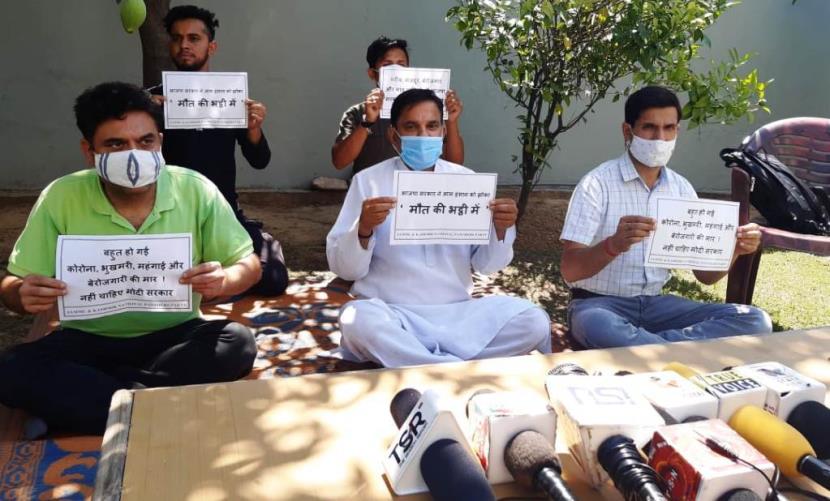 The protestors, carrying placards, sought explanation from the Indian BJP leadership for loss of precious lives due to corona pandemic as well as for raging inflation and growing unemployment.

Addressing the media, Harsh Dev Singh squarely held the Indian BJP rule responsible for the catastrophe that had struck India. Not only had all-pervasive corona terrified the masses but its fall out in the form of deadly diseases like black fungus, white fungus, yellow fungus, septic etc had made the situation worse.

He said the fast spiralling prices of petrol, diesel, LPG, pulses, vegetables, cooking oil etc had multiplied the woes and sufferings of the marginalized sections. Asserting that the BJP government had failed on multiple fronts, Harsh Dev Singh said that it had lost the right to rule especially in the wake of prevalent situation created due to massive avoidable deaths, growing unemployment and raging inflation.

Meanwhile, Asha workers of Rajouri district held a strong protest demonstration at district headquarters, demanding release of their pending wages of two months. Maintaining that they are facing starvation, the workers said that they were protesting outside the office of Chief Medical Officer, Rajouri, for the last two days but have remained unheard by the administration.

ASHA workers of Langate block of Kupwara also staged a protest against the administration for its failure in addressing their demands.

The protesting workers said that they had been rendering their services for almost a decade now without getting regular and adequate salary.

They said that besides their overburdened assignments, their services were being utilised to deal with the COVID-19 pandemic with a meagre remuneration of Rs 1000.

“We want the administration to increase our remuneration so that we can fulfill our basic needs,” they said.